Four Brides and a Train 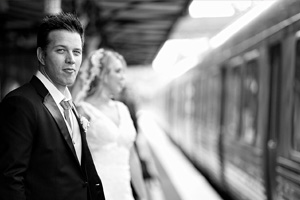 The ride of your life. Which one would you choose?

Many days I give advice. Many days I direct you towards help. Today I thought I’d tell you a story. I promise you’ve never heard this one before. And, I promise you will never look at another bride on her wedding day the same, ever again.

Four beautiful brides are standing on a train platform on their wedding days. Each of them dressed as lovely as the other. Long white dresses. Veils flowing down their backs. Trains of white satin cascading as they take each step toward the tracks. Each of these brides arrived from different stations. And when they leave they will depart on separate trains.

When you look at the brides you can’t tell too much about them, don’t all brides resemble one another on their wedding day? Is anyone college educated? PhD perhaps? Is someone straight out of high school? Is anyone a career woman who waited to get married? Are any of these brides famous? Did one of them come from money? Did one grow up in poverty? You really can’t tell. They are all ethereal visions in white gowns – appearing almost heavenly as they stand waiting.

In a moment four trains will arrive at the station at the exact same time. The brides will be told that each train has only one seat left. They will have to make a decision and commit to it. All four trains will have signs on the front that say Destination: Happiness. Because honestly, on their wedding days, what else are they expecting?

The brides will see train track reaching out as far in front of them as possible until the ground meets with the horizon. They will be asked to pick their train and begin their journey. It’s the happiest day of their lives. We see them getting on board – long white satin trailing behind them as they climb in each of the four separate trains. Pulling their dresses up as the doors close, and taking their seats.

We watch the trains take off at the exact same pace and in the exact same direction. Each is moving in a straight line as they vanish from our sight. We wait to see what happens next, but they drive out of our view. They drive to their first stop: Behind Closed Doors. They are told that what happens there stays there, and it is up to each of them to manage the rest of their journey. Each bride agrees, and the trains start moving again.

Two of the brides continue on. They travel a path that is not always easy, not always straight, and oftentimes, very bumpy. They eventually arrive safe and sound exactly where they expect, Destination: Happiness.

The other two brides have some problems with their trains, and each make a detour that they do not expect. They stop off at a place called Psychological Aggression. It is terrifying from the moment they arrive. They were expecting Happiness, they were looking for Happiness, and they have no idea how they got here. But, 50% of all women end up in Psychological Aggression and they are the two. They never saw it coming. So thrown from the change in plans, they keep quiet while they try to figure out what to do next.

And then the fourth bride’s train starts moving again. She is feeling the most confused because she was told that Happiness was just a short drive down the way. And during her journey she is seeing things out the window that she did not expect to see. She took the last seat on the train, she knows no one else, and so she sits and waits to see what will happen next.

She’s sleeping when something loud and terrifying jolts her awake. There is dark smoke and a lot of dust and she looks up at the destination sign. It said Happiness the last time she looked up. The sign now says Domestic Abuse. Domestic Abuse, she thinks to herself. What the hell am I doing in Domestic Abuse? I didn’t ask to come here. This wasn’t my plan. I was heading towards Happiness. What just happened?

The doors open and she slowly exits. There is a large sign sitting on the platform that reads:

BE CAREFUL WHO YOU TRUST.

BE CAREFUL WHAT YOU SAY.

DON’T LEAVE WITHOUT A PLAN.

ONLY 25% WILL MAKE IT OUT WITHOUT INJURY, AND SOME WILL DIE TRYING.

You’re waiting for a happy ending, right? Isn’t that what we always get, a happy ending? So was I. If you haven’t “met” me yet, if you haven’t seen my blogs, or read Sparks in Love, or heard my name, let me introduce myself to you: My name is Susan Sparks and I am Bride #4.

If we went back to the train station and talked to all four brides before they boarded the trains, what would we learn?  I can tell you. We would learn that all brides look the same on their wedding day, the same way that all victims of domestic abuse cannot be picked out in a crowd. We don’t share any certain characteristics. We don’t share any socioeconomic status, or educational level, or follow any belief system that sets us apart from you or anyone else. We did one thing and one thing only that set us on a different path: we fell in love with the wrong person.

Either way, we have work to do. We have brides on trains heading towards disaster that need our help to get off before they get there. We have brides who have already arrived whose lives are in danger and we need to get them out. And, we have single and engaged women who have yet to arrive at the train station. They have plenty of time to turn around if we can get in front of them and educate them about what lies ahead.

What would you have done if you knew where my train was going? Would you have tried to help me? Because it’s not just a story about four brides on their wedding day. It is the story of my life. And it’s too late for me not to become Bride #4. But it’s not too late for everyone else. We still have time to get to that station.

HOW YOU CAN HELP RIGHT NOW:

Susan is a twenty-year victim and six-year Survivor Of Domestic Abuse (SODA®). Her reporting has been seen on national network news and her writing has been featured on national media. She has also studied and worked in the field of divorce. As Susan Sparks, she is an Expert on YourTango.com and has been featured on The National Domestic Violence Hotline (thehotline.org) and other popular online sites such as Medium and Hollywood Life. She has written a book about her experiences with domestic abuse, Sparks in Love, which she hopes will serve as both an educational and cautionary tale to everyone who reads it. She is the Principal of four enterprises, and one charity, The SODA Fund, all dedicated to helping people avoid, understand and prevent domestic abuse. Susan is currently working on three other books to further the cause and hopes to bring Sparks in Love to television in 2019.